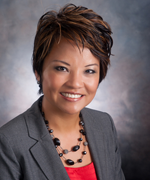 Sonni Choi Williams is City Attorney for the City of Lockport. Previously, Sonni served as the Deputy Corporation Counsel for the City of Peoria, where she has worked for the City’s Legal Department for more than 17 years, starting as the Assistant Corporation Counsel. Her more than 15 years of litigation experience covers multiple practice areas, including negotiating settlement agreements of lawsuits involving multiple defendants with potential high figure liability both through in-court mediations and out of court.

Sonni received her Bachelor of Arts from the University of Iowa and her juris doctor degree from Northern Illinois University.

Sonni has been a presenter at various seminars on a variety of topics, including: Federal Practice Seminar (Enforcement of Settlements); Open Meetings Act; Ethics; New Supreme Court Rules on Ordinance Prosecution; Landlord Licensing and Regulations; Whistle Blowing in the Government Sector; Pros and Cons of Administrative Adjudication of Municipal Code Violations; and Vehicle Impoundments.

Sonni's service to the community includes serving three years on the Foundation Board for EP!C, f/k/a Parc, whose mission is to enrich the lives of children and adults with developmental disabilities. In addition, she has shared her story of being a poor immigrant overcoming obstacles to obtain the “American Dream” at swearing in ceremonies for new citizens.