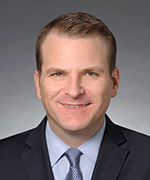 Ray J. Koenig III is a Member in the Litigation and Personal Legal Services Practice Groups in the Chicago Office of Clark Hill PLC. Ray also serves in leadership roles within the firm, which includes serving as the Managing Member of Clark Hill’s Chicago office and on the firm’s Executive Committee.

Ray's practice emphasizes charitable planning, elder law, guardianship and conservatorship administration and litigation, trust and estate administration and litigation, trust department services, and wills. He has represented individuals, families, financial institutions, medical institutions, and governmental organizations in all areas of his practice. Ray has extensive trial, appellate and mediation experience in state and federal courts. He is frequently appointed Guardian ad Litem and defense counsel by judges in complicated guardianship matters. He is also appointed Special Administrator by judges in problematic probate matters. He has also been retained as an expert witness in multiple guardianship and probate matters.

Ray is a Fellow of the American College of Trust and Estate Counsel (ACTEC) and previously served as a member of its Fiduciary Litigation Committee. Ray has been recognized by Super Lawyers magazine as a Trust and Estate Litigation Super Lawyer or Rising Star for most years from 2010 through 2018, and was named one of the Top 100 Lawyers in Illinois in 2018.  Ray was also named an Illinois Leading Lawyer in Trust, Will & Estate Planning Law from 2013 through 2017, having been nominated by his peers as one of the top 5% of practitioners in this state. Ray also received an “AV®” Preeminent Rating by his peers through Martindale-Hubbell, the highest possible rating.  Finally, Ray was selected from over 1,350 nominations as one of the 40 Illinois Attorneys Under Forty to Watch in 2013 by the publisher of the Chicago Daily Law Bulletin and Chicago Lawyer.

Ray was also profiled in an article titled “A Fierce Advocate for LGBT Rights” written by Dustin J. Seibert in Leading Lawyers Magazine – Consumer Edition for 2016.

Ray is a regular contributor to IICLE programs, including the annual Estate Planning Short Course, and IICLE publications.